How To Install Wire Brush On Angle Grinder? | All You Need To Know

Installing a wire brush on an angle grinder is similar to installing any other blade attachments. You need to dismantle the blade guard and arbor nuts to take the old blade out and install the new wire brush. After re-attaching the parts, you can use the grinder again.

An angle grinder is one of those tools that you will always find in the toolshed of a DIYer. Thanks to its versatility, it can be used for a wide range of household tasks.

In fact, if you use a wire wheel, you can use the angle grinder to clean grime and debris off of a surface as well. But from our experience, many users do not know how to install one, which keeps them from fully utilizing this functionality.

That is why we have addressed it in this brief guide. So, if you are curious, dive in!

What Are Angle Grinder Wire Wheels? 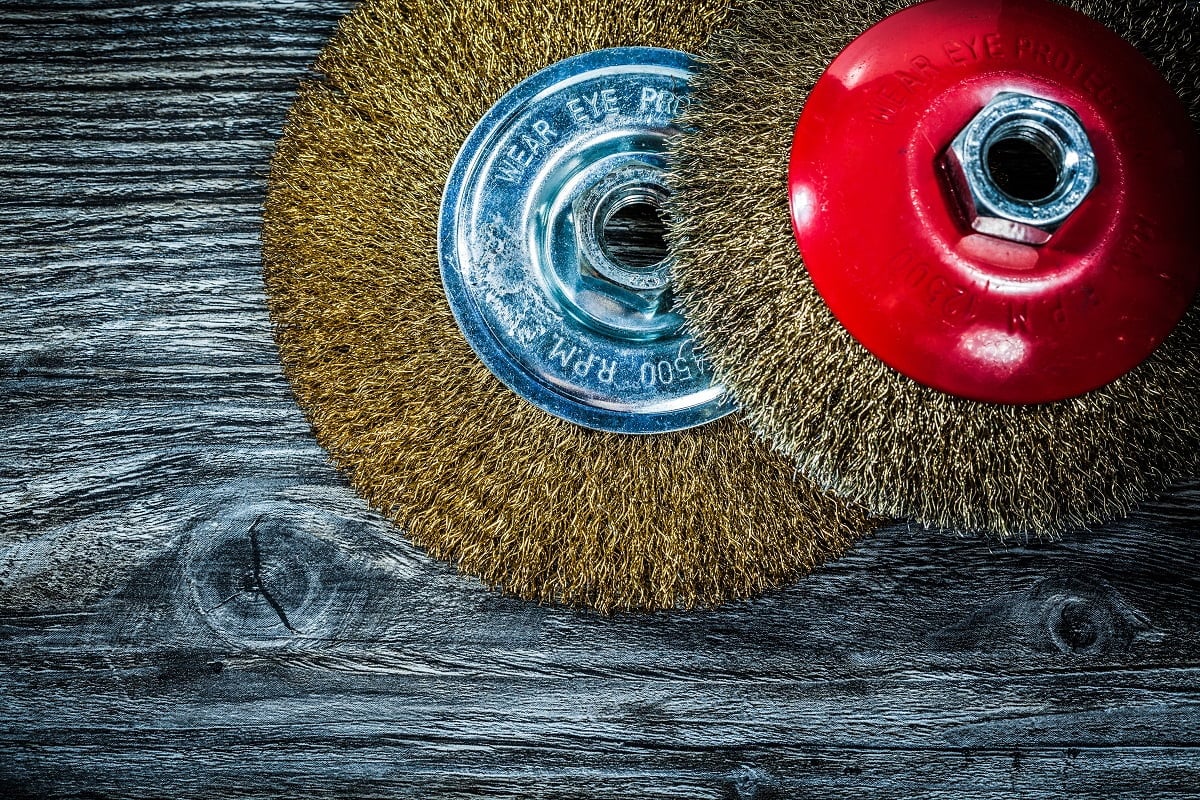 Before we proceed to the meat of this article, let us discuss a little bit about what wire wheels are. If, by any chance, you haven’t heard of the term before, then this will give you a good idea.

Wire wheels are a specialized attachment that you can use on angle grinders to clean and deburr a surface. In some cases, it can also be used to scrub paint off surfaces. Such a feat is made possible owing to the design of this attachment.

Unlike other angle grinder blades, wire-based attachments come with numerous metallic bristles attached to the edges. These bristles are generally made from hard and springy steel, which makes them tough enough to scrape off materials from a surface. Some manufacturers may use brass, copper, or even stainless steel, which improves the durability of the bristles.

On that note, there are two different types of wire-based angle grinder attachments available today – wire wheel and wire cup brush. Despite being used interchangeably, there are certain differences between these two, as we have discussed below.

Typically, the wire wheel is shaped like most other angle grinder discs. The wire bristles are attached along the edge of the disc, while the base or the center of the disc is attached to the angle grinder.

As the name suggests, the wire cup brush is an attachment that is shaped like a concave cup. Here, the bristles are attached at the edges, and they are situated perpendicularly to the base of the cup.

The bristles of this attachment are made of the same materials as the ones used in wire wheels. Because of the design, wire brushes are commonly used to scrape and polish flat surfaces.

How To Install Wire Wheels/Wire Brushes On Angle Grinders?

Even though wire wheels and wire brushes are quite different in design compared to conventional angle grinder blades, the procedure for their installation remains almost similar.

Now, many models today come with convenient mechanisms that allow you to remove the angle grinder blade without a tool. But if you have an older model, you can remove and install the wire brushes just like any other angle grinder attachment using the process we have described below.

First, you need to unplug the grinder and remove any batteries just to be safe. Then dismantle the blade guard by removing the screws that hold it in place. In some models, the blade guard may be attached with a latch, so make sure to dislodge it before proceeding further.

You need to carefully remove the arbor nut that attaches the blade to the machine. Next, pull the blade out of the angle grinder spindle gently. Before you do that, though, make sure that you lock the blade by pressing the blade lock button. It is usually located near the switch, and it stops the blade from spinning unnecessarily while you remove it.

After removing the old disc, place the new wire wheel over the spindle. Make sure to align it properly with the grinder so that you can seamlessly attach the arbor nut. In case of wire cup brushes, however, you can directly attach or thread the brush wheel to the spindle. This means that the previous steps might not be necessary in that situation.

Once the wheel is in place, carefully reattach the arbor nut with a wrench. Make sure not to tighten it too much, as it can damage the nut. Then reattach the blade guard, and put the battery back in the machine. After that is done, you will be good to go!

Knowing how to install a wire brush or wire wheel isn’t enough – you also need to know how to use an angle grinder. That’s what we have discussed in this section, so we suggest that you keep reading.

When operating an angle grinder, you need to use the correct technique, or else you won’t be able to do a good job with it. This is especially true in the case of wire wheels.

Make sure to set the correct spinning speed while using the angle grinder. Using an angle grinder at high speeds makes it very difficult to control, and unless you are an experienced user, we would not recommend it. That said, the speed shouldn’t be too low either so that you can get the job done effectively.

You should also consider the angle and pressure at which you hold the angle grinder to the surface. And be careful and attentive while using it as this is a pretty powerful tool, and even the slightest mistake might lead to a serious accident.

Keeping that in mind, here are some safety tips you should follow when using angle grinders. 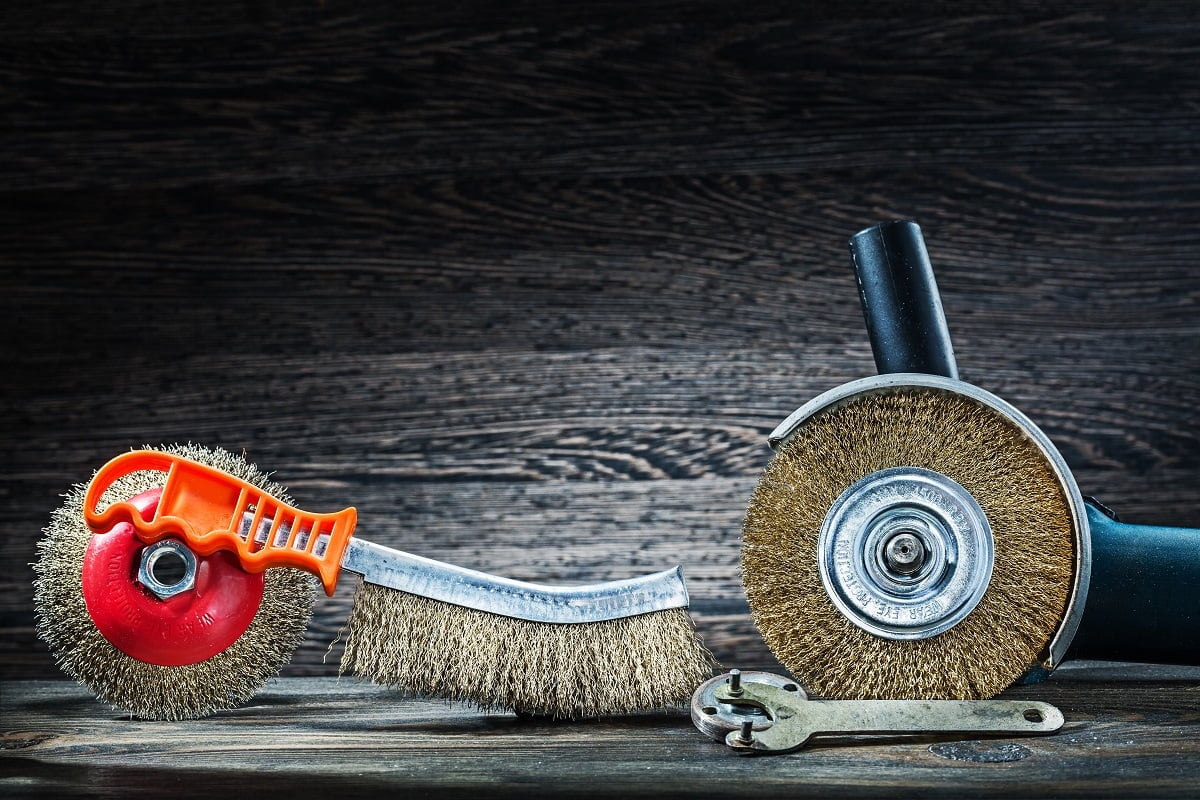 How To Install Wire Brush On Angle Grinder Final Words

Installing and using a wire brush on an angle grinder is a better strategy than scrubbing and polishing surfaces manually. Not only do you save a lot of time and effort, but you can also do a better job.

However, using a heavy-duty power tool like an angle grinder comes with its fair share of risks, which is why people may tend to avoid it. But if you follow the safety tips we have discussed, you will be completely safe.

And once you get the hang of it, you won’t want to go back to manual scrubbing and polishing ever again!

How To Remove Angle Grinder Wheel Without Tool? | All You Need To Know

How To Use An Angle Grinder? | All You Need To Know