How to Deal With Yellow Jackets | All You Need to Know

Are buzzing yellow jackets making it impossible for you to relax in the garden even for a while?

We understand your concern. Finding loads of yellow jackets foraging now and then can be a headache indeed. And when you have children and pets at home, this can be all the more worrisome since these insects leave really painful stings.

Hence, controlling these yellow jackets becomes essential. In this guide, we have compiled all the various ways in which you can tackle these insects. We have also included some essential information that you need to know about yellow jackets and their habits.

So, without further ado, let’s get started.

How to Deal With Yellow Jackets 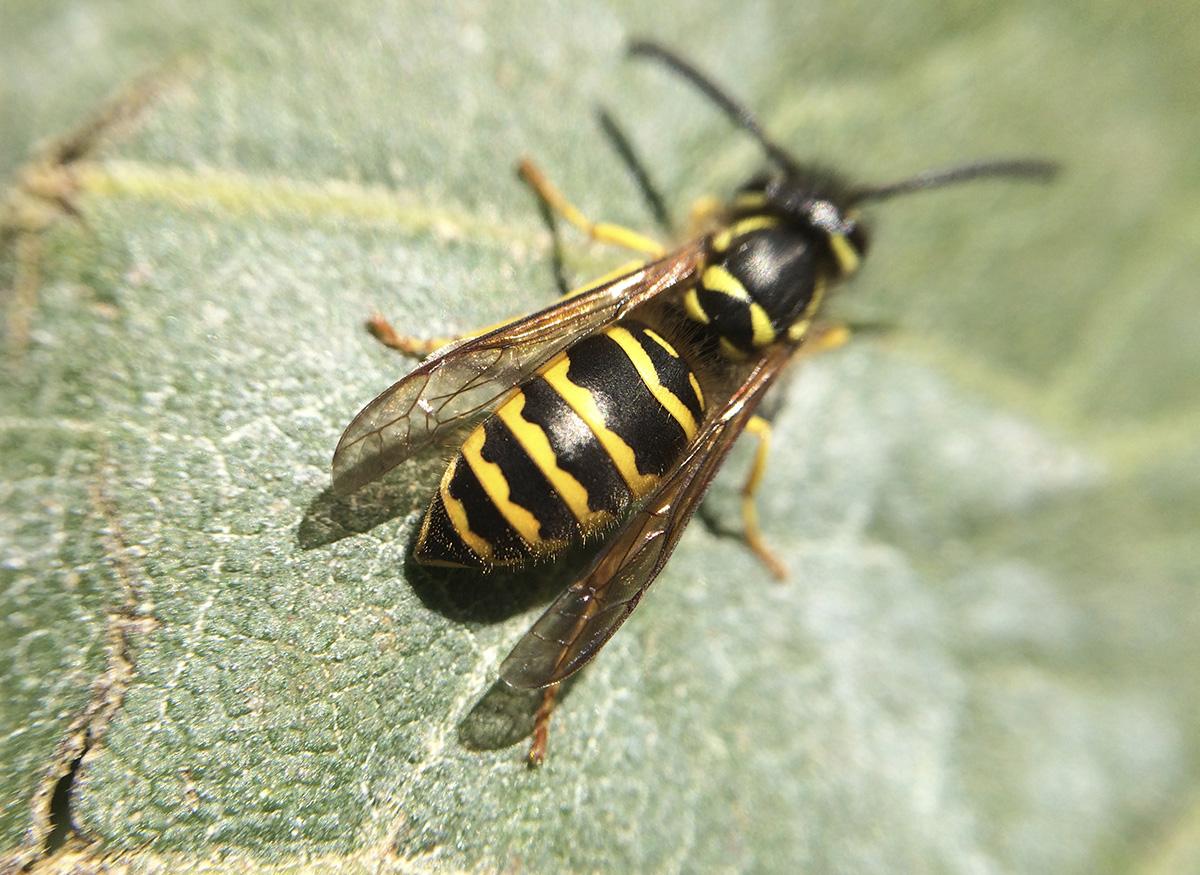 The insect, which is known to people around the world as a “wasp” is also referred to by the name yellow jacket. Native to North America, this insect got such a nickname due to its striking yellow color with black stripes.

In fact, this is why you might mistake it for a bee, which is much gentler in nature and is a more endangered insect. The hornet is another similar looking wasp which is often mistaken to be the yellow jacket.

These insects have a slightly smaller size than the regular bee or wasp and are only around 12 mm long. However, queen yellow jackets can grow to a length of 19 mm.

What makes them dangerous is the fact that they can repeatedly sting without being affected, unlike the bee which will die as the stinger is attached to its heart. They generally tend to build nests in protected areas in a garden which are not directly exposed to rain, sunlight or wind.

What Do They Feed On? 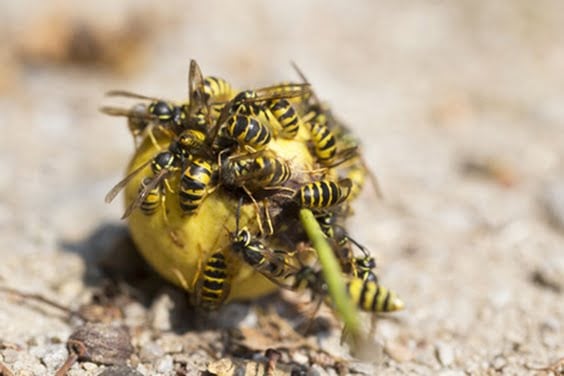 Yellow jackets also have similarities with wasps in their food habits, since they prey on several other insects and arthropods. As such, if these insects are present in small numbers and keep away from any human activity, they can be useful in controlling other pests.

Yellow jackets also look out for food items which are rich in carbohydrates and sugar. You will often spot them around flowers, on tree barks, and on fruits. Also, the larvae require protein to grow, for which the larger worker insects search for fish and meat to feed them.

Life Cycle and Habits Of The Yellow Jacket 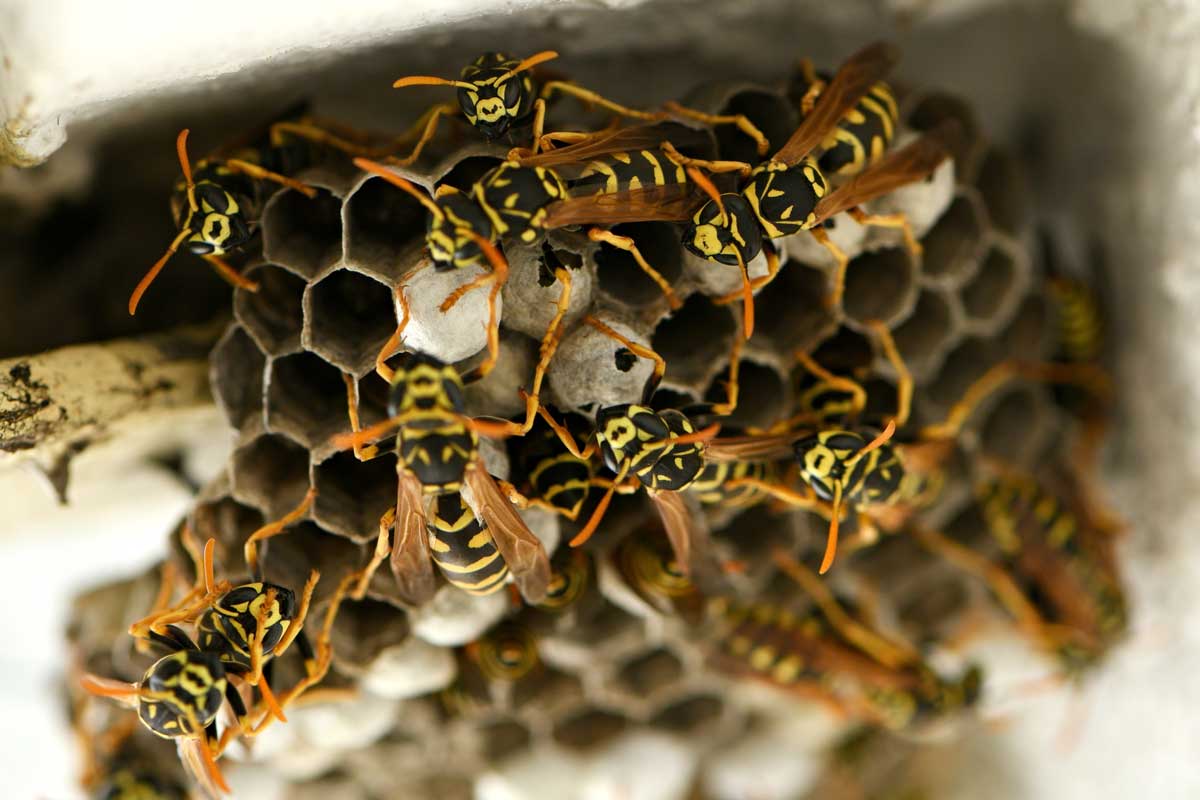 These insects have a similar life cycle as that of other bugs. Starting off as an egg, they gradually become a larva, then change to pupa, and ultimately develop into the adult wasp. A queen yellow jacket finds a nest site and makes a small nest from paper where it lays the eggs.

The queen insects can generally lay upto 50 eggs at once. When the eggs hatch, the tiny insects are fed up to 20 days until they develop into small versions of the fully matured wasp.

These insects eventually take over from the queen and keep on feeding the rest of the larva. You would usually find them maturing into adults during the summer.

Yellow Jackets are social wasps and belong to the Vespula genus. A surprising as well as worrisome fact is that a season is enough for these insects to produce several thousand workers.

The genus has a total of 18 species, which consists of several types of yellow jackets. These differ according to their growth habits and are identified by the area they are found growing in. Identifying them is important so that you are able to deal with the insects properly and effectively. In the next section, we have categorized yellow jackets according to the place where they build their nests.

The German yellow jacket, which has its origins in Europe, is located across the midwestern and northeastern regions of the United States. These are widely distributed throughout many temperate areas of the country. They are usually found in wall voids, attics, cracks and crevices in a building surface, and crawl spaces.

A few yellow jackets, like the D. maculata and D. areanara build nests that are attached to the eaves of structures or hang from a tree. These are not as aggressive as other types.

When these insects forage in large numbers in areas of human activity or even are nesting nearby, they can create a lot of problems. Most types of yellow jackets become quite aggressive if their colony is disturbed and may sting anyone they find nearby.

In such circumstances it becomes necessary to control the infestation. There are several ways of dealing with yellow jackets, depending on the severity of the situation. These include some preventive control measures that can be taken beforehand.

You must keep in mind that if yellow jackets find food in an area, they would continue foraging that area at intervals. You can face this even after the original food source is dealt with. Hence it is important to maintain some sanitation practices even prior to noticing yellow jackets in any area. This will also help in dealing with the problem without having to kill them. Here are some methods:

Make sure you have no food sources kept outside for yellow jackets to live off from them. Un-emptied cans, animal food or leftover food lying outside can attract these insects and their larva. So, keep the garbage in sealed cans and put your pet food inside instead of the backyard.

You must not forget that these insects feed on anything sugary. So, in case you are having dinner on an outside table and are thinking of bringing dessert along, dump that idea. You can have it to your heart’s content indoors.

It might seem surprising, but cucumbers can indeed be helpful in keeping away yellow jackets. This vegetable contains an acid which yellow jackets don’t like, so you can slice some and scatter them all around your garden before any outdoor gathering. 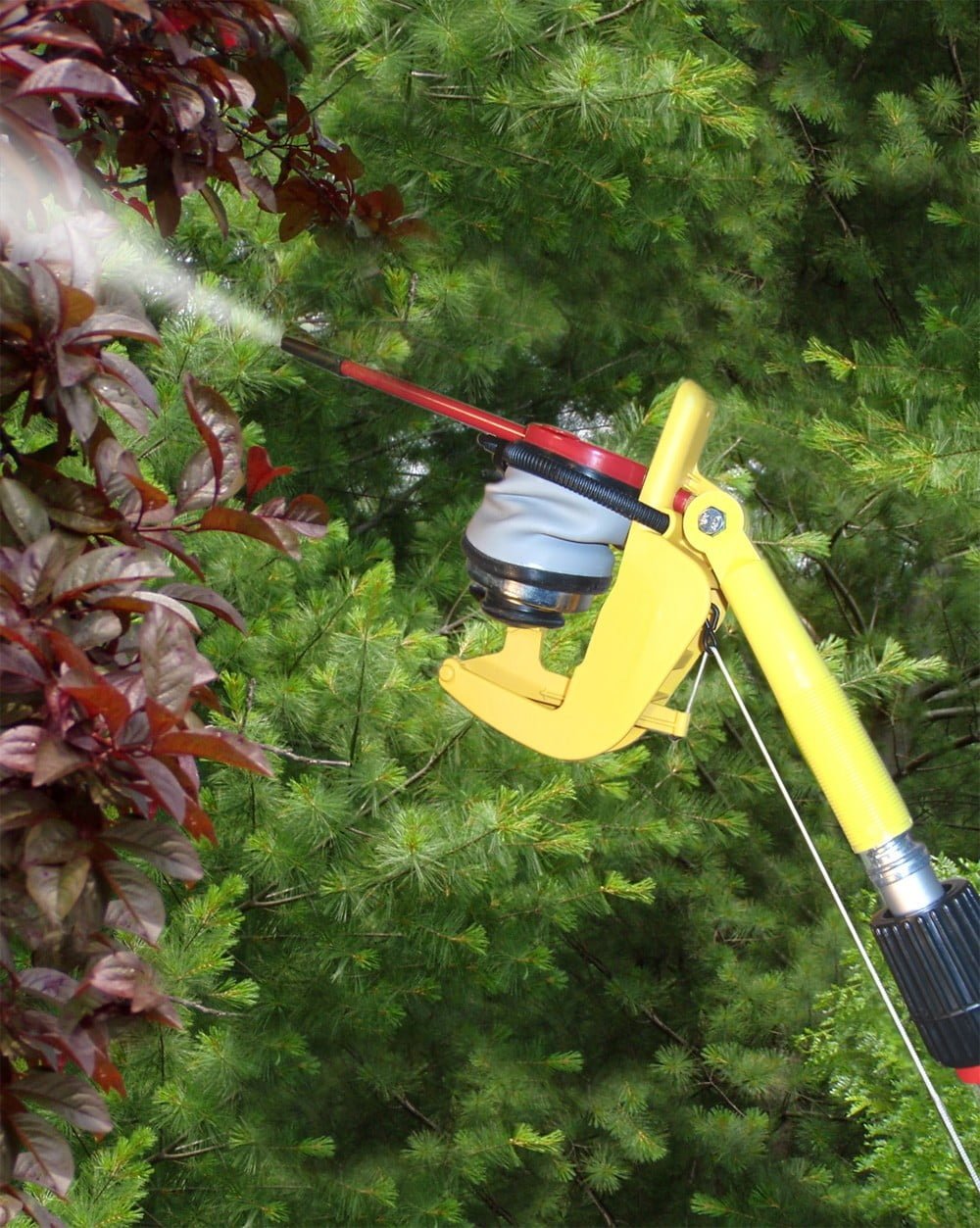 If you are tired of the frequent foraging of yellow jackets and may even have been stung sometimes, you can consider removing the nest itself. But this should be carried out carefully and slowly.

You should also be aware of the nesting habits of these insects which we have discussed earlier in this article. Remember that though all wasps would defend their nests, hornets and yellow jackets turn specifically aggressive for protecting the queen.

If you disturb the nest, these bugs may swarm out from the colony and attack what they consider to be the disturbance. So, you need to take the necessary protective measures and proceed in the right way. Here is a guide for how you should proceed to kill a nest of yellow jackets:

You should do this during the daytime, so that you can identify the worker insects entering and leaving the points of entry. Search for multiple entry points and make sure you mark them.

Treat the nest only when it is dark. Yellow jackets don’t have a strong vision, which reduces the chance of getting stung. Besides, at night the entire colony will be there in the nest which would make the treatment most effective. 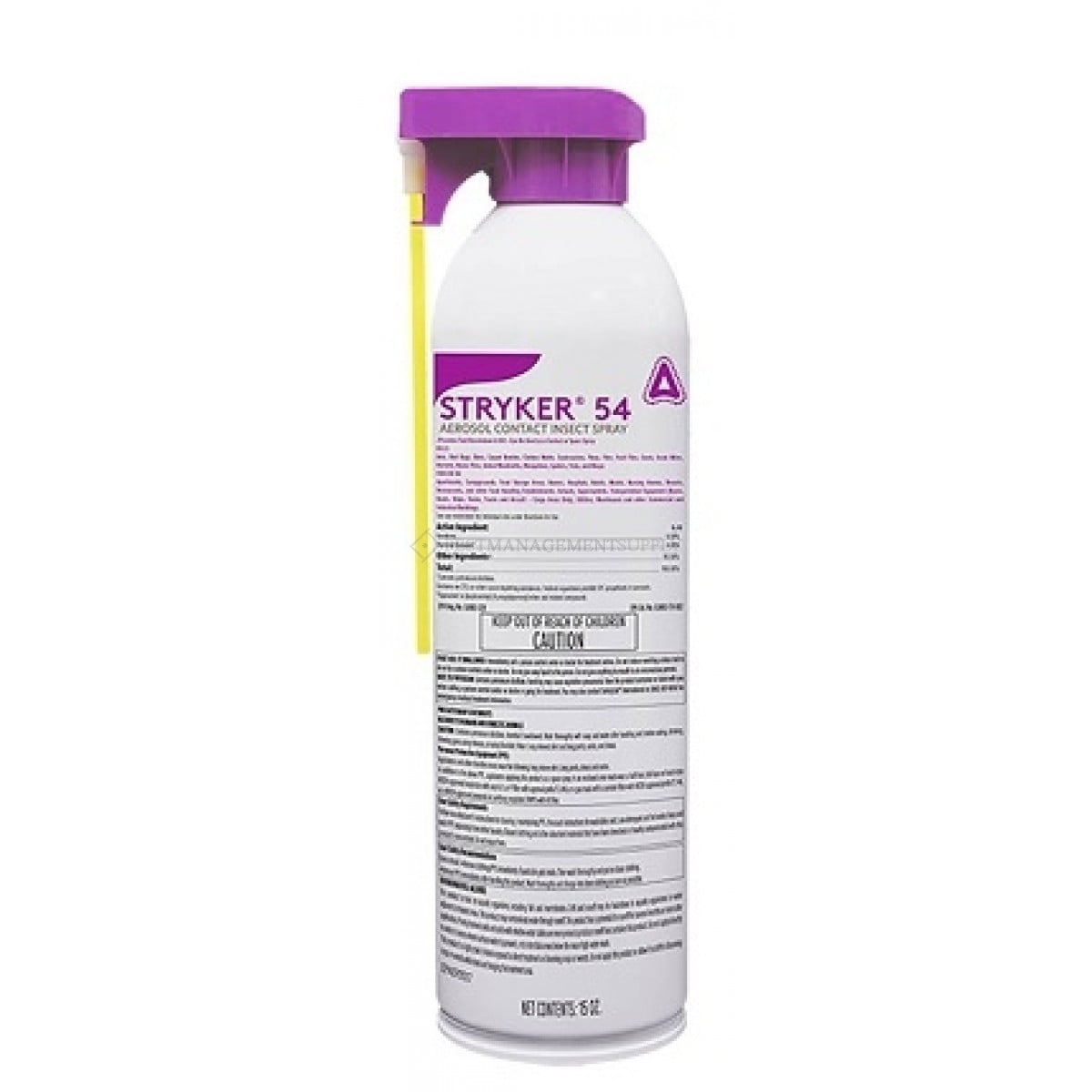 You should treat the nest with pyrethrum aerosols such as CV-80D, Stryker 54 Contact Aerosol and PT 565. It is the pyrethrum that forms a gas and fills the cavities in the nest to kill these insects on contact. Use a good-quality sprayer to spray the aerosol in areas hard to reach.

Wait for about 10-15 minutes for the aerosol to become dry and then dust the opening with insecticide dusts like Tempo Dust. This dust will stop any future hatch outs. You must also dust the entrance, the whole nest and surrounding areas.

After a day, you must go and check the nest to see if the insects are dead. This can be verified by the lack of any activity in and near the spot. Repeat the process if you find some of them are still alive.

Baits for yellow jackets can either be made using available resources at home or may be purchased from the market or online shopping sites. Here are two such baits that can effectively control yellow jackets:

Using this innovative method often helps to keep away yellow jackets. Fill some 5-gallon buckets with soapy water. Then use a string of some length to secure a protein food as bait such as a small piece of ham.

In this way, the bait will dangle a few inches above the water. Finally, cover the bucket with a wide mesh that allows the jacket to enter. The insects which want to take the bait will fly within the water and drown. Also, make sure that the traps are well away from any patio or picnic areas.

These bait stations can be purchased online and are designed for use with Onslaught Insecticide. First, you have to supply the station with fresh meat along with the Onslaught. This lures the insects into the bait station, after which they ingest the mixture of meat with insecticides. It kills the yellow and black bugs then and there.

This bait is widely used during the summer and spring months to kill the most common yellow jackets which consume meat and protein.

You will find yellow jacket traps useful if you cannot locate the nest. Using a lure such as meat or fruit juice with a trap like the Advantage Yellow Jacket Trap works perfectly in such cases.

You can put up such traps by some simple steps mentioned in a guide along with the pack or on the product label itself. This trap is really beneficial during cookouts and picnics, as it draws the insects away from you. Keep in mind these points while you put up the trap:

In case some of the bugs enter into the walls when it is cold, some reproductive yellow jackets may survive in the walls. In the spring, they would come out to venture outside.

The reproductive insects won’t sting, so there is nothing to worry about that. However, if the nest is located in a warm place, then it may survive the winter in its entirety. To kill the nests you can use the Stryker 54 on the entrance during the dark.

Usually, you will know straight away when a yellow jacket has stung. The symptoms of such a sting are really unpleasant but can be treated. First of all, you will feel the pain, and within a while, the area will redden and start swelling.

To treat a sting at home, you can mix one spoonful of baking soda in water and apply on the sting with a cotton ball. This would help in neutralizing the venom of yellow jackets. To reduce itching, put a little vinegar on cotton and pat on the area.

However, for a small section of people who are more allergic, the sting has life risks. This is known as anaphylaxis and leads to dangerous symptoms such as itchiness, swelling of tongue and skin rashes. Immediate medical consultation and treatment are needed in such cases.

So, if you have been struggling to get rid of these aggressive insects from your garden, we hope this article has been of some help to you.

You may have assumed earlier that it would be a herculean task, but it’s not so difficult after all. You just need to be careful at every step and make sure you are protected when going near the nests.

Wearing gloves and boots, shirts with long sleeves, and trousers with sealed cuffs would help to prevent stings and disturbances.

So, now that you know all about it, go ahead and bring your garden back to its old glory!

Epsom Salt In Gardening 101 | All You Need to Know