They offer powerful, professional quality audio for your performance setup, making sure your efforts in selecting and/or producing some great music get the boost they need.

This article is all about choosing the bookshelf speaker with the best bang for your buck!

We start off with reviewing what we feel are the best bookshelf speakers on the market as of today, some of the best entry studio monitors  as well as a few turntables to go along with the speaker; a legendary collection DIY Bookshelf Plans and Ideas is also around, cast a glance!

We then follow with a guide on what you should look for in the bookshelf speakers you end up choosing.

Finally, you’ll end up being informed about the best choices on the market and the knowledge on how to make the best purchase. Without further ado, let’s begin! 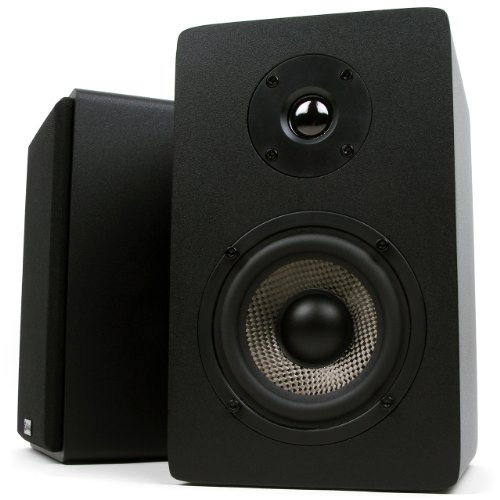 The Dayton Audio MK402 offers incredible value and audio quality for the price, considering that the speakers are so small! It comes in a 2-way speaker pair, and the MK402BT model can be hooked up with Bluetooth enables equipment if you’ve adopted a wireless way to playing music. The woofer can handle anything from 60Hz to well into the vocal range.

In our experience, the MK402 model gave clean vocals, and very little in way of distortion. The build quality is millennia ahead of the older B562 series, with better cabinet quality, a real crossover, good quality drivers and actual binding posts instead of cheap clip-ons.

However, the B442 gives much better sound quality all things considered. With some tone adjustment, you easily reach the limits of the MK402.

What is the best use for the MK402 model in our opinion is using them as side speakers, left and right, and getting an MK442 for the centre. For a relatively inexpensive amount, you would have created a rather good-quality audio setup! The MK402 shines in the fact that it isn’t a barely functional bookshelf speaker, but actually does the job properly, even if at a budget. Adhering to its budgetary constraints, the MK402 is a solid option for quality audio on the cheap, delivering wonderful bass and

Frugal yet packing a punch, Dayton Audio pulls off a winner in this price category. Easily one of the best available bookshelf speakers on the market – even if there are compromises. Luckily for Dayton, these compromises don’t come in the form of substantial audio quality losses. Hats off to Dayton for having pulled this off! 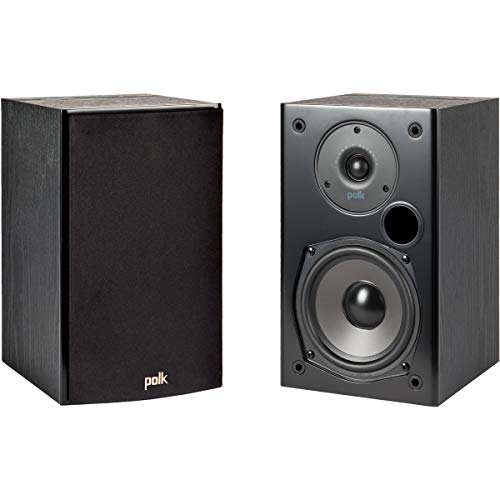 The Polk Audio T15 is a uniquely shaped speaker, given its rather eccentric orientation. The takeaway here is that it is meant to be mounted at a position which is either higher or lower with respect to the listener. It offers good audio quality and it is ideal for use as a surround speaker, which is one of its USPs.

Starting off with the elephant in the room, the Polk Audio T15 is clearly not designed to be a run of the mill speaker by any chance. The dynamic range of this speaker is unheard of [pun unintended] in this price range, which makes it ideal for use as a household speaker. It is capable of handling pretty much anything you throw at it. 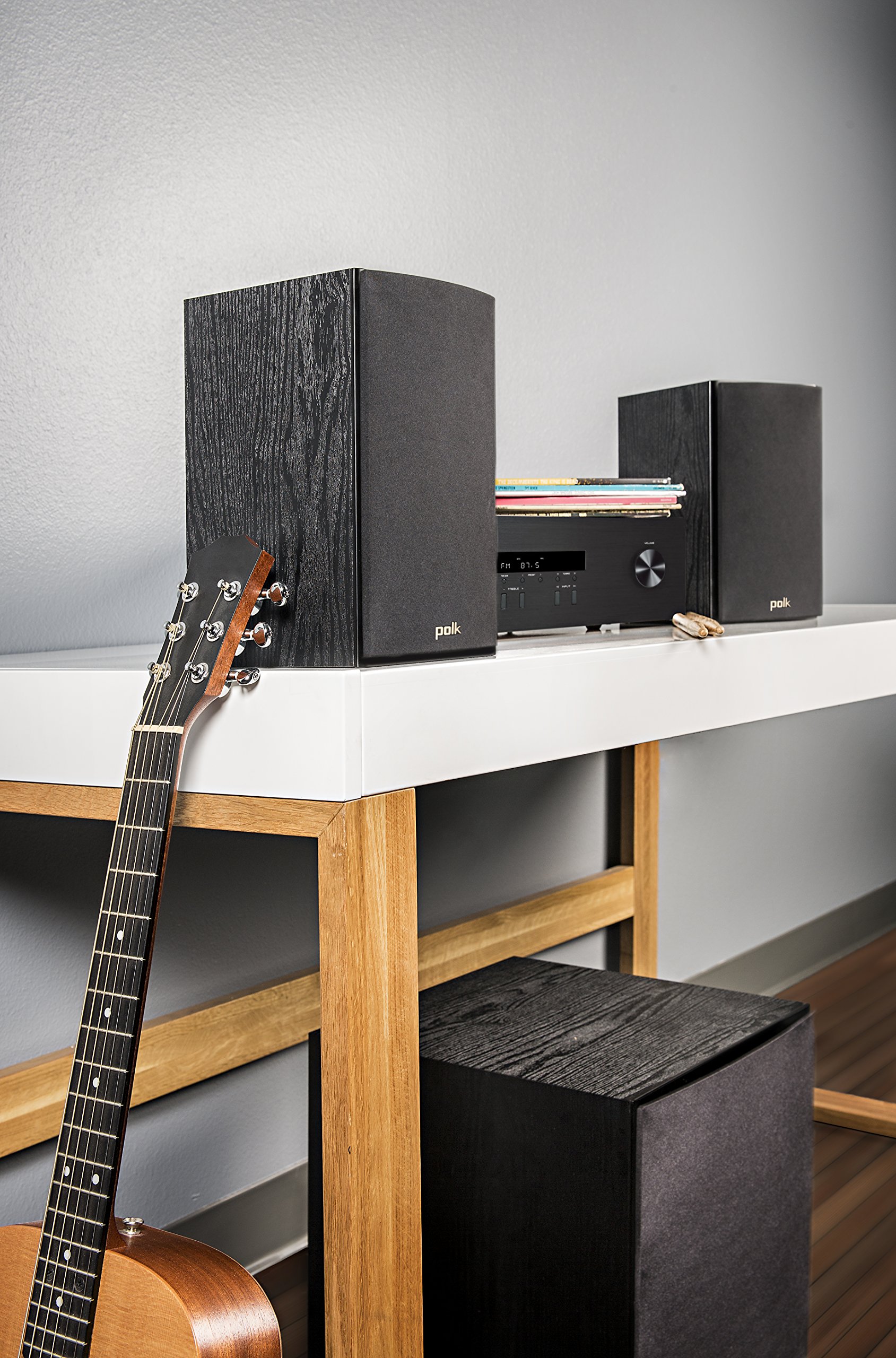 Polk Audio is renowned for its attention to detail, and even in this relatively inexpensive speaker set, they do not disappoint. The only concern here is the 8 ohm impedance which might not be supported by the other instruments in your audio toolkit. Besides that small niggle, the Polk Audio T15 is near the top of the market when it comes to bookshelf speakers under $100, if not the best.

A solid choice which has very little compromise on either the sound quality or the build quality. Definitely one of the winners among this set of bookshelf speakers, if the 8 ohm impedance is compatible with the rest of your equipment. The size, shape, and build are perfect, in addition to having the latest in audio tech available in bookshelf speakers.

The Monoprice MP-65RT is a very modestly manufactured speaker, wherein there are many usual upmarket components missing – such as a low pass filter and a crossover. It is, however, a great addition to your audio system given its modest price.

This pair of speakers gives you an audio experience which is virtually indiscernible from a lot of good quality audio systems out there. It comes with a 6.5” polypropylene cone woofer and a 6 ohm impedance.

Barring any biases we have against this particular speaker, being the cheapest item on this list, we actually got much more than what we expected to. The audio was clear even at louder volumes, barring the lowest of frequencies given the audio response range from 60Hz to 20kHz. The treble would have been a bother, but luckily any problems which occur are found at the higher end of frequencies. 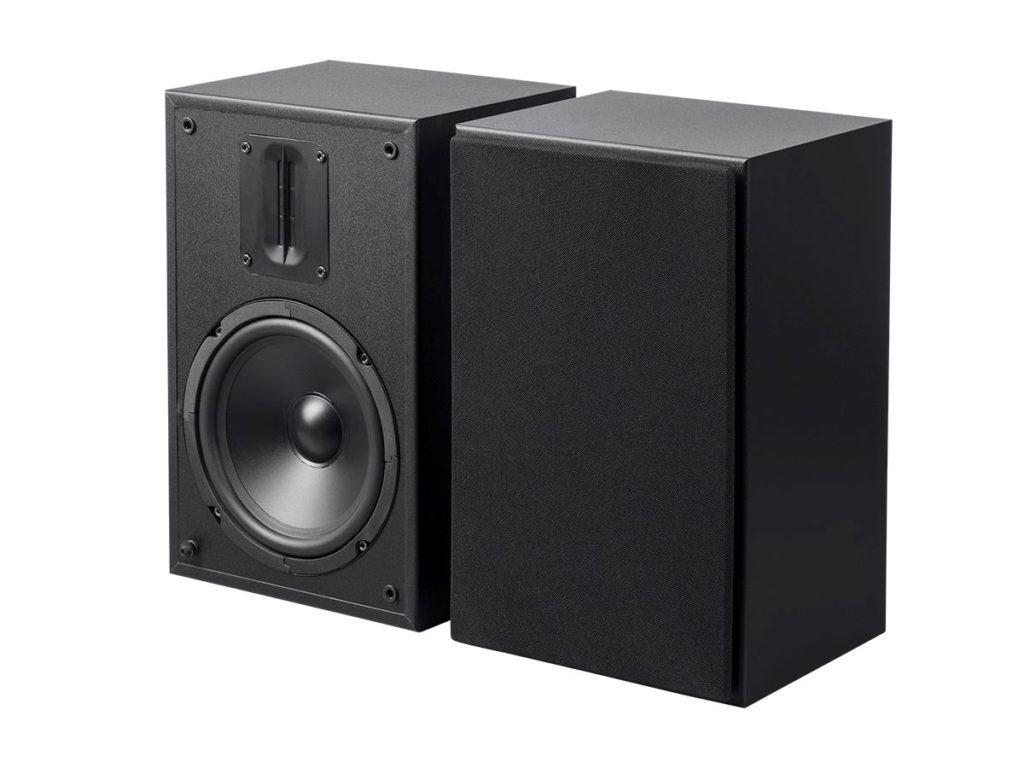 Given its lack of a real crossover and having to make do with crossover boards, it’s a miracle on the part of Monoprice to have pulled off such a wonderful soundstage performance. The vivid nature of output will definitely have you confused with a more expensive setup. For those looking for their first bookshelf speaker, this gets a strong recommendation.

The unique selling point of this speaker set is the ribbon tweeter. Generally only found in speakers which cost twice as much, ribbon tweeters are susceptible to even the most subtle changes in the audio output. Hence, if you listen to quickly changing instrument tones, the Monoprice MP-65RT gets another thumbs up from our side.

If you’re a first time buyer, the Monoprice MP-65RT is perfect. While lacking some basic technical equipment such as a crossover and a lowpass filter, it makes up for it by providing ribbon tweeters, a higher-price range addition. Even in the absence of seemingly necessary equipment, the audio quality takes zero hits, and is as good as any other speaker on this list [besides a small problem in the highest ranges of treble]. A solid addition to any audio setup. 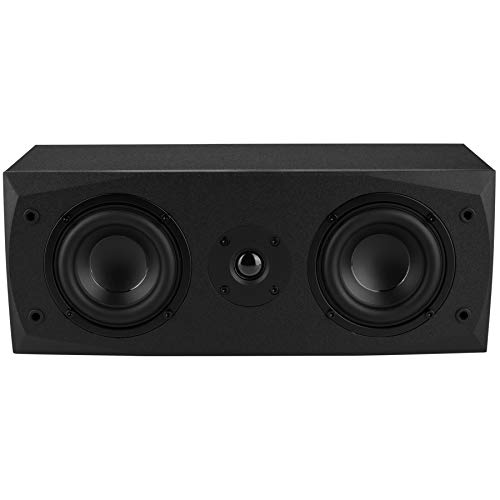 Having introduced you to its smaller brethren, the Dayton Audio MK 402, it is only fair to include the MK 442 in the list. At the outset, it is a slightly more expensive version of the MK 402, in that it is meant to be a center speaker and not a bookshelf speaker per se. However, it can just as easily be used as a bookshelf speaker on its own.

Technically speaking, the MK 442 has been built to impress. It comes with a full crossover, 4” woofers, and a wonderful internal circuitry to boot. The audio quality is excellent, if a little bright at the higher range of frequencies [a common problem with speakers of this class]. However, even that is wonderfully avoided for a large range frequencies, and hence, for regular desktop listening it makes for a great addition to your home audio. 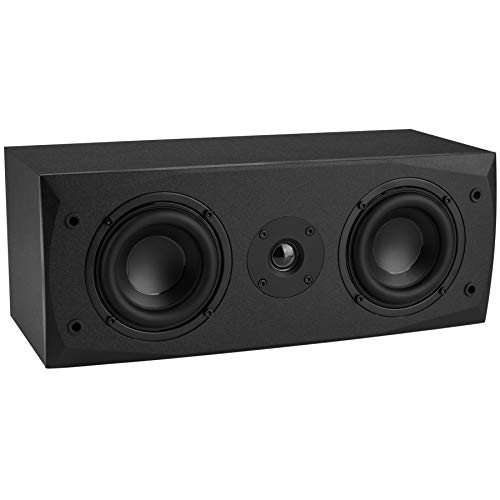 The problem comes in when you consider the ergonomics, since the speaker turns out to work much better vertically than horizontally. Other than that, there are no major issues to consider. The speaker works at 4 ohm impedance, though that figure is rarely ever reached in practice.

The best audio output can be brought into the fore fairly easily, with just a little tinkering from your end. Contrast this with the MK 402, where you’d have to spend a fair bit of time just figuring out the sweet spot for a number of different audio styles.

A serious leg-up on the MK 402, especially considering the audio output. The presence of a real, proper crossover moves this speaker to a different arena altogether, along with better internal components. Next up, the bass response from this speaker is out-of-this-class entirely. The size is very easily manageable, and while the audio presents some problems sometimes, there isn’t much like it in the sub 100 dollar price bracket. 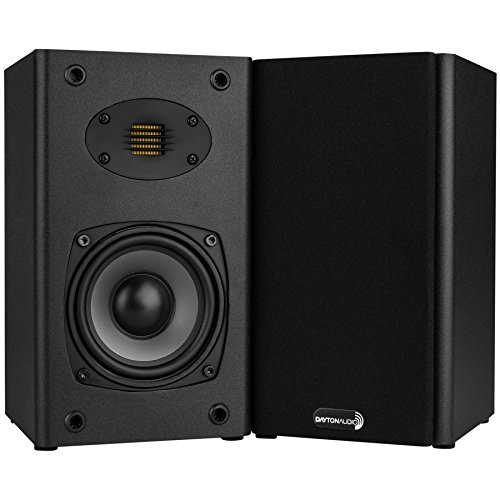 This is Dayton Audio’s original take on a bookshelf speaker. Coming in this list as the oldest, and the cheapest of all listings, the B-452 skimps on a few essentials but delivers a quality audio experience, which is enhanced when you get the C-452 centre speaker as well. It’s a fully functional bookshelf speaker at a bargain basement price.

The first thing that strikes you about the B-452 is the size. It is incredibly lightweight and small sized for a bookshelf speaker. They come with rather indistinguishable grilles on the front, which can easily be removed in order to have a more aesthetic look. As far as audio quality is concerned, it does the job well with a few caveats.

The audio response is great for the price, especially due to high end AMT tweeters being used in their design. This gives you a response which changes for even the most subtle changes in tone, and you hear crisp, succinct tones. The lack of a crossover is evident from the sound, with only a capacitor and resistor in its place. The 4 ohm impedance is compatible with most audio setups out there, so it can just as easily be used as a secondary speaker. 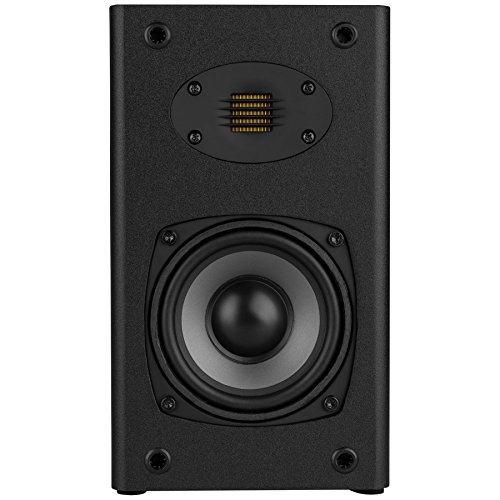 The best way to get high volume out of the B452 AIR is to have a complete setup with subwoofers and amplifiers which can get the most out of this speaker. For most kinds of music, TV viewing and movies, the speaker does the job perfectly well.

If budget is a constraint, the B452 does the best it can from within its physical limits. The lack of a crossover prohibits it from being used as a reference-level device, but for daily use, it does the job incredibly well. Be it jazz, rock, metal or Symphony No. 9, you’re unlikely to go wrong with this.

Having finished up with reviewing, we now turn our attention to the most important considerations while purchasing bookshelf speakers. Since equipment costs a lot of money, you need to be triple-sure about where you’re spending money on, and hence need to consider a few factors in relative depth.

The major factors that you need to take care of are the frequency [in Hertz], the power [in Watts] and the drivers. The higher the Hertz, the lesser is the frequency of the bass you will hear. The heaviness of the bass depends inversely on the Hertz value.

Coming to the watts, the higher the power delivered, the greater is the audio output. This becomes important when you have to connect your speaker to an amplifier. The drivers are equally important, however, they are not quantified.

The kind of drivers present in the speaker affect the audio quality. Woofers and tweeters are the most important ones, but a third mid-level driver will give you clean, clear cut audio across the audio spectrum.

Mostly only a shelf or a designated space to keep the speaker on. Otherwise, these speakers are self sufficient, and besides the cable used to connect these to other accessories, there isn’t much they need. Wall mounts are also a great option.

After having explored the world of bookshelf speakers and turntables, you’re now ready to begin your hunt! You looked at some of the best offerings on the market on the cheap, as well as a few turntables which offer the best bang for the buck.

You also got to know the factors you have to keep in mind before going ahead and buying the audio setup of your choice.

We sincerely hope you find the equipment you need, and that our guide pointed you in the right direction.